The Bourbon Tunnel – exploring the underground of Naples 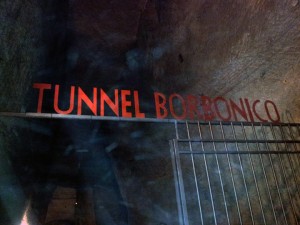 The underground of Naples has always been an integral part of city life; you can tell from the access to the Bourbon Tunnel (Tunnel Borbonico in Italian), located inside an elegant parking lot in the city center. Even if the citizens sometimes forget this truth, it’s a fact that through the ages the underground served as water supply, source of building materials, illegal dumping, hospitalization during WWII, garage and so on.

The first part of the Adventure Path proposed by the cultural association “Borbonica Sotterranea” consists of a series of spaces throughout the ’50s and ’70s that were used as legal deposit of stolen cars and motorcycles, some of which are still shown to preserve the testimony of that period. Galleries with trapezoidal walls of tuff introduce to spaces – giant tanks – that carried water to the city of Naples from ancient times until 1885, when the Serino aqueduct got in service after that a cholera epidemic uncovered all the flaws of a non-intubated water distribution system. 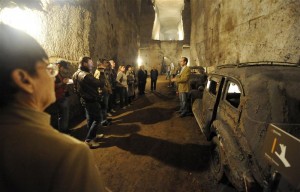 Through narrow passages is possible to observe rooms whose ceilings are up to 10 meters tall, apparently excavated and waterproofed; the walls – marked by the level of water through the ages – are interrupted by the holes of tiny tunnels that connected the dwellings to the tanks.

The real showpiece of the entire trail is the Bourbon Tunnel itself: its construction was begun by king Ferdinand II of the Two Sicilies in the mid-nineteenth century in order to join the Royal Palace with Piazza Vittoria by a secret underground path. Remarkable aspect is the coexistence of this work (reminiscent of the corridor that leads the cavern of the Sibylla Cumana) with the water system: designers overseen by Errico Alvino had the task of creating the infrastructure while preserving and enhancing the functionality of tanks during and after work – that was never completed for a number of reasons. 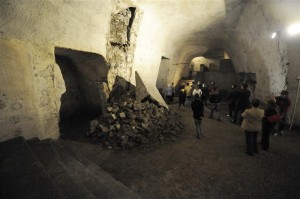 The last recorded use of the Bourbon Tunnel before its conversion to tourism dates back to the nineties of the twentieth century, when it was used as a service tunnel for the construction of a section of the Quick Tram Line (Linea Tramviaria Rapida), a project that had to join the neighborhoods of San Giovanni and Bagnoli. As like as the Bourbon Tunnel, it was doomed to fail in the vast sea Neapolitan “tangentopoli“. The tract in object belongs to the itinerary, and since flooded by an underground aquifer it provides the opportunity for a small divertissement: a short raft trip immersed in the most total silence and darkness, just few meters below the chaotic surface of Naples.